We are having a week of celebrations. In my last blog, I touched upon the festival of Maghi Ganesh Jayanti, which is celebrated especially with great enthusiasm in the states of Maharashtra and Goa (personally very important for me with both my grandsons having being born during this festival period). The celebrations peaked yesterday with traditional areas of Mumbai like Dadar taking out processions with tableaux and Lezim by school children.

However, beginning the 7th of February, the love week has already started. The first day is the Rose Day, followed by Propose day, Chocolate Day, Teddy Day, Promise Day, Hug Day, Kiss Day, culminating into the Valentines Day on 14th of February. Originating as a WesternChristian feast day honouring an early saint named Valentinus, Valentine’s Day is recognized as a significant cultural, religious, and commercial celebration of romance and romantic love in many regions around the world. Initially opposed by traditionalists as western culture vitiating the Indian ethos, it is now largely accepted, as anything to do with love cannot be crass, crude or undesirable and ought to be beautiful. Moreover, India has its own legacy celebrating sex and romance as a form of art as depicted in the architecture of Ajanta and Ellora and elaborately explained in classic treatise Kama Sutra.

As I wrote in one of my earlier blogs, we probably grew up too fast and too soon, because Valentines Day was relatively unknown and unheard of during our youth. However, Basant Panchami, the fifth day of the month of Magh as per Hindu calendar that heralds the end of bitter cold and advent of spring, was celebrated with much fan fare, especially in schools as Saraswati Puja. Falling tomorrow on Sunday the 10th of February is this year’s Basant Panchami. Let’s not forget our legacy and keep our children abreast of our traditions and culture also along with Valentines Day. After all, isn’t India a nation of multiplicity? If Hindus, Muslims, Sikhs and Christians can co-exist, Basant Panchami/ Maghi Ganesh Jayanti and Valentines Day can surely too be celebrated together.

My friend’s travel company Marvilla that’s very fast establishing itself as a company of great substance has found a unique way of greeting its patrons on festive occasions. I had earlier shared their post that they had issued on the eve of Lohri. I now share their most recent post wishing their customers happy Basant Panchami and Saraswati Puja that reads as: 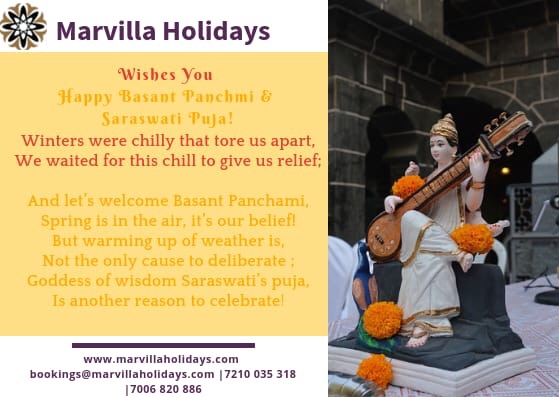 Happy festival week to all my readers