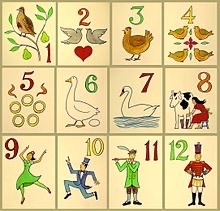 The Twelve Days of Christmas, also known as Twelvetide, is a festive Christian season celebrating the Nativity of Jesus. In most Western ecclesiastical traditions, “Christmas Day” is considered the “First Day of Christmas” and the Twelve Days are 25 December – 5 January, inclusive. The Twelve Days of Christmas” is also a famous English Christmas carol that enumerates in the manner of a cumulative song a series of increasingly grand gifts given on each of the twelve days of Christmas. The song, published in England in 1780 without music as a chant or rhyme, is thought to be French in origin. The tunes of collected versions vary. The standard tune now associated with it is derived from a 1909 arrangement of a traditional folk melody by English composer Frederic Austin, who introduced the familiar prolongation of the verse “five gold rings”.

However, the matter of greater interest to me was the historical significance of each of the gifts, which has been very nicely explained by a fellow blogger, ” Coach Mueller” in one of his recent blogs. Taking the liberty of liberally borrowing from his aforesaid blog, the significance of these gifts are:

Day 1: “The partridge in a pear tree” is Jesus Christ

Day 2: “Two turtle doves” are the Old and New Testaments

Day 8: “Eight Maids A-Milking” are the eight Beatitudes (blessings listed by Jesus in the sermon on the mount)

Day 10: “Ten Lords Are Leaping” are the Ten Commandments

There’s festivity in the year as we approach Christmas and also prepare to bid adieu to 2019 to enter into a new decade. Hopefully, this festivity overwhelms the current state of disturbed atmosphere in the country.

Merry Christmas and season’s greetings to all my friends and readers.